Despite the surfeit of dive computer reviews and comparisons out there – some of which helped shape my choices – I feel a short, targeted list of recommendations might be of use to many new divers, overwhelmed by the selection.

This is my first recommendation when it comes to recreational dive computers for a traveller.  Small, good battery life and great No Deco Limits.

Oceanic computers are made by Pelagic. Pelagic has been bought by Aqualung, and have released their own version of the Geo 2.0, called the i200. Same, but ONLY has the Pelagic Z+ algorithm, which is so conservative I do not like recommending it.

For those wanting to spend an extra $500 (RRP $1000), you can get the Oceanic OCi. It has a poor screen layout, but has a digital compass (which isn’t great, but handy), and has wireless air integration. The Aqualung version is the i450T, which fixes the screen layout, but has the really conservative algorithm. As a sidenote, the wireless transmitter used by the OCi and i450T is the same as used by the Shearwater Perdix AI and Teric, so there are some other upgrade/compatibility routes.

It’s reasonable. It’s cheap. It supports nitrox. Has a backlight. Battery lasts about 150-200 dives (at least 18 months of diving). Everyone has one – getting help, service and assistance on a Suunto Zoop is dead easy.

No user-serviceable battery, (but you can). It’s big. I’m not a fan of the algorithm – it seems less granular than Suunto’s other computers – but it’s a better algorithm than the original Zoop, Aqua Lung’s, Cressi’s or Deepblue’s.

Can be found second hand for under $200USD.

The previous version, the Zoop, has one less button and no backlight, but can be found for under $100USD now. This makes it a great backup / spare computer, or just a first one to tide you over until you know what you really want.

It’s far from my favourite, but isn’t bad. It has a conservative algorithm, and is physically bigger than the Mares Smart or Oceanic, but not as big as the Zoop.

Be aware that it has an alarm which is very sensitive to depth changes. So much so that you don’t want to put it on the wrist of someone who is still flailing around with their arms when diving, otherwise the alarm will go off. All. The. Time. This can be turned off, admittedly. Also, stop flailing your arms.

It only has one button, which is pretty awful if you have to make any changes – such as setting the nitrox mix every dive. It takes a bit of time move around the menus, especially if you pass something and need to loop around again.

Battery life is “2 years based on 50 dives per year“, which seems far less than it really lasts in the real world (where, like most computers, it lasts for hundreds of dives, and is more year-based than dive-based).

This is a tough computer to recommend. Many dive sites give it their “Editor’s Choice” or similar for entry level computers, but many users complain about it in the real world. I cannot agree with any writer who gives it his “Editor’s Choice”, as it is obvious they’ve never had to use it. The interface is just too clumsy.

The price is good, but I would prefer to spend a little more money on one of the other computers here. 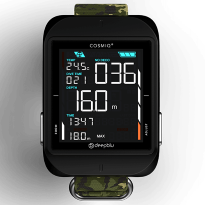 Now we’re getting away from traditional computers into something a bit fancier. Most of the computers with OLED screens (or similar) are around $1000USD and up. The Deep Blu is surprisingly cheap for what you’re getting: it only costs $400USD new.

To make any changes to the computers’ settings, you connect it to your phone via bluetooth and their app. This also lets you easily log your dives, verify with your divemaster and share them online – it’s pretty slick.

Cons: it only gets 6 to 12 hours of battery life per charge. If you’re on a liveaboard for a week, diving 5 times a day or more, this might not be the best computer for you. You will need to fastidiously charge it over night, every night. But if you can clean and dry it (this is important), and plug it into your USB charger, you can go again the next day. The internal battery should last 500 to 1000 charges, which is enough for years of diving before you need to send it in to have the battery changed.

While the screen is bright and clear, I am not a fan of some of their layout and sizing choices. This is more of a personal note / complaint, but I would have made some of the smaller items  at the bottom larger. It is definitely designed for recreational use, not professional.

The algorithm it uses is harsh. It has three settings: conservative, normal and progressive. Even at progressive, it is more conservative than Pelagic’s Z+ algorithm for multiple dives – and my feelings about that algorithm are not positive. That said, for new divers, who want to stay extra, super safe, and don’t mind shorter, shallower dives, this isn’t necessarily a bad thing. You will need to be aware of it when purchasing and planning, however.

Meh: The phone software is regularly updated, with a few new features and bug fixes each time.

Conclusion: If you’re a casual recreational diver, with 2-4 dives a day, and then back home to the dry resort with internet access, this would be a fine computer. The way it helps encourage dive logging is great, and I am a big proponent of that.

First time using AirBnB? It’s growing around Asia!
Get up to $50USD off of your first booking!

(And help support my travels!)

Use Transferwise to send money internationally for free! (up to 500GBP sent for free for new users)

Use Beem It to send money instantly between Australian accounts. Use my referral code: QRPF5Z to get $5, just for signing up!